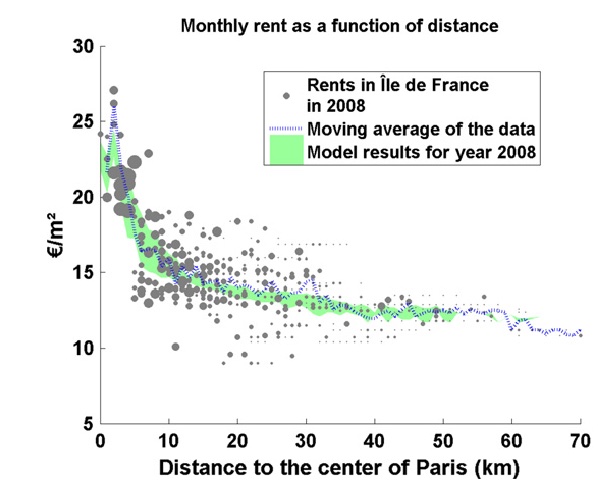 The NEDUM-2D model is used to downscale four global socio-economic scenarios at city scale and simulate the evolution of the Paris urban area between 1900 and 2100. It is based on a dynamic extension of the classical urban economic theory, to explain the spatial distribution of land and real estate values, dwelling surfaces, population density and building heights and density. A validation over the 1900– 2010 period shows that the model reproduces available data and captures the main determinants of city shape evolution. From four global scenarios and additional local inputs, 32 local scenarios are created and analyzed. Main drivers of urban sprawl and climate and flood vulnerability appear to be local demographic growth and local policies; global factors, such as energy and transport prices, even including possible peak-oil and carbon taxes, have only a limited influence on them. Conversely, transport-related greenhouse gas emissions are mainly driven by global factors, namely vehicle efficiency changes, not by land use. As a consequence, very strict urban policies – including reconstruction – would become necessary to control emissions from urban transportation if technologies reveal unable to do so. These scenarios are a useful input for the design and assessment of mitigation and adaptation policies at local scale.