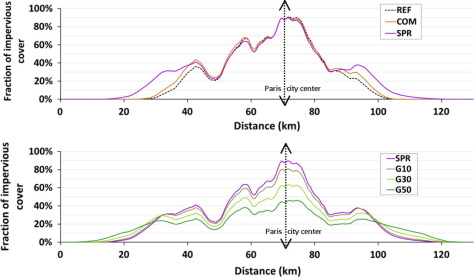 The evolution of heat-wave risk in cities is related to regional climate change in interaction with urban heat island. Land planning and urban transport policies, due to their long-lasting impact on city’s size and shape, can also have an influence. However, these combined effects are complex and strongly depend on the indicators used to quantify heat-wave risk. With Paris area as a case study and using an interdisciplinary modelling chain, including a socio-economic model of land-use transport interaction and a physically-based model of urban climate, air temperature in the city during heat waves is simulated for five urban expansion scenarios. The urban heat island is always higher at night and affects preferentially the city centre. Its intensity and spatial extension are moderately impacted by densification process and choice in urban form. But the variation of heat-wave risk with the densification dynamics is not limited to the effect on urban heat island, and also depends on exposure to heat of population. Spatial distribution of population in the city differs according to urban expansion scenarios. The results show that the compact city, by concentrating the inhabitants in areas the most impacted by heat island effect, amplifies the overall vulnerability of population.