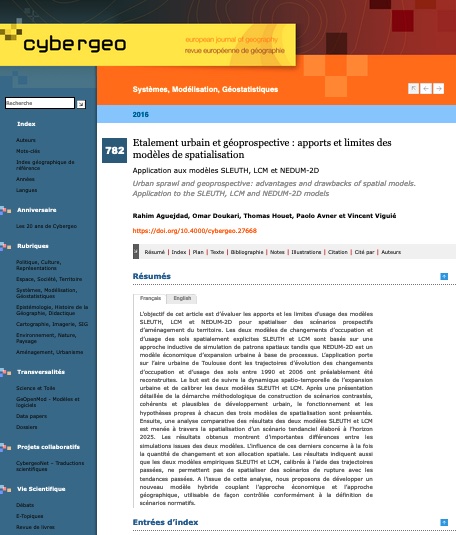 The aim of this paper is to assess the advantages and drawbacks of using the SLEUTH, LCM and NEDUM-2D models according to their ability to translate narrative user-defined urban planning scenarios into quantitative land use and land cover change simulations. SLEUTH and LCM, which are land use and cover change models, are spatially explicit and inductive pattern-based models while NEDUM-2D is an economic processes-based model. Applied to the Toulouse metropolitan area (France), SLEUTH and LCM are calibrated based on past urban growth dynamics observed between 1990 and 2006. After a detailed description of the methodology utilized to build contrasted, coherent and plausible urban development scenarios, the modeling framework and hypothesis of each model are presented. Then, a comparative analysis of the SLEUTH and LCM outcomes is conducted based on a baseline scenario for 2025 constructed using past trend extrapolation. The results show important differences between the LCM and SLEUTH models’ outcomes. The influence of models on the simulation results concerns both the amount of change and its spatial allocation. The findings also highlight that, based on a scenario-oriented approach, none of these empirical models is suitable by itself to deal with contrasted and anticipatory scenarios assuming the absence of path-dependency. Based on this analysis, we suggest developing a new hybrid and dynamic spatially explicit economic model that should be used in a fully controlled forecasting mode and combine economic processes and spatial patterns of urban growth.